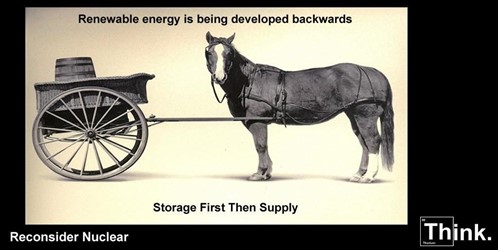 Windpower enthusiasts measure success by the ever-increasing penetration of RE in the electricity grid and especially the high points in South Australia on Sunday afternoons. This enables them to ignore the failure of the system on windless nights.

A chain is only as strong as the weakest link? And the flood defence is only as good as the lowest point of the barrier – never mind the high points or the average height of the defensive wall!

The weak links and the low points of the RE “wall” are windless nights and periods of  high demand (breakfast and dinnertime) when the wind is low.

Wind-droughts in August and September last year showed the failure of the system in SA.

The chart shows the amount of wind power generated in South Australia hour by hour through August. The dotted line across the chart at 219MW is close to 10% of the installed capacity of 2,100MW and it marks the upper level of supply that I regard as a “wind drought”.

From the 12th to the 18th the supply was mostly under the line and consequently they were importing power every day of that week at breakfast and dinnertime. They were importing at lunchtime as well during that period and this is unusual due to the amount of solar they have. 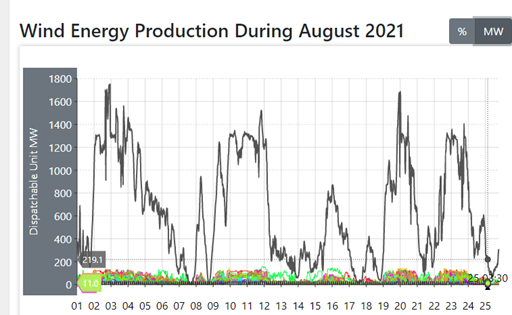 South Australia is a net exporter over 12 months but that it practically beside the point because they depend on imports whenever they are in drought. When other states, led by Victoria, get rid of more coal power they will not have spare power during wind droughts to prop up SA.

Another failure at breakfast-time 5 Sept

The wind across the NEM was a little better than average (34% of installed capacity compared with 29%). In SA it was slightly lower than average (25%) and in Victoria it was 30%. Sunday is a day of low demand but at that time both SA and Victoria were importing power from Tasmania and from Queensland via NSW. Almost half the local generation in SA was gas power and 70% of the local generation in Victoria was coal power.

When the wind is lower then obviously those states are even more dependent on fossil fuel and any significant reduction in the current capacity of coal power in the NEM will put them in the dark during wind droughts.

That is just about the end of the RE story until there is feasible and affordable grid-scale storage because there is no way to deny the reality of wind droughts. They are clearly visible in the AEMO records and Tony from Oz has been monitoring the situation for years using these records. It is about time for more people to pay attention. This is the Introduction to his comprehensive wind generation series.

Mike O’Ceirin has an interactive site based on those records and this link takes you to a list of periods when the whole of  the NEM was in drought (under 10% of installed capacity) during 2020.

On 18 occasions the duration of the drought was ten hours or more and in June the drought on the 5th and 6th lasted for 33 hours. Other droughts in June lasted for 18, 16, 14 and 9 hours.

For more instructions on wind watching check out the addendum to Note 20.2.  https://www.flickerpower.com/index.php/search/categories/renewables/20-2-four-icebergs-in-the-path-of-renewables-titanic

The takeaway message is: Pay attention to the low points of RE instead of the high points!