20.02 Four Icebergs in the Path of Renewables Titanic

Purpose. To explain that the transition to renewable energy will be very difficult in Australia with existing storage technology

Background. All the major parties are in favour of increasing the supply of electric power from wind and solar energy.

Four features of the Australian situation will make the RE transition very difficult and impossible with existing storage technology.

That these critical issues be discussed in the party rooms, in the media and among the public.

Records from the Australian Energy Market Operator (AEMO) show the amount of wind power delivered to the grid from every wind farm in SE Australia. Every month there are periods when the input is less than 10% of the installed capacity of the wind fleet and the input can fall below 2%.

Individual states experienced long periods at zero or even negative numbers when the turbines drained power from the grid instead of contributing to it. 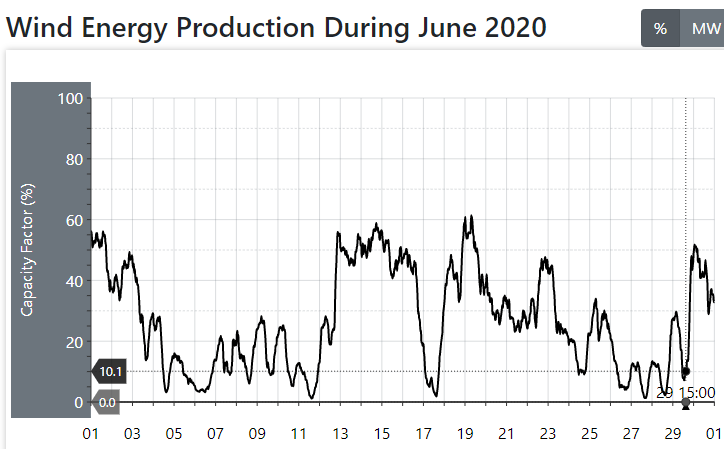 This means that the grid needs to receive enough input to supply 100% of demand 100% of the time. We are in the same situation because we need a continuous supply of air to our lungs.  If the supply is cut off by choking or drowning, we are dead in a few minutes.

At present wind droughts do not threaten to cut off the electricity supply because we have enough conventional power for our needs (almost all the time). This situation will change when more coal-fired power stations are closed, starting with Liddell in NSW in 2023.

Isolation from neighbours. As an island nation we do not have neighbours to assist with power when we have a wind drought. All the European nations and the states in the US can tap into massive continental grids with input from all the different sources of power including nuclear energy.

Batteries like the Elon Musk Tesla facility in South Australia are supposed to even out the peaks and troughs in the supply of wind and solar power but they have virtually no capacity compared with the demands of the grid.  They are not used for storage, they are used as bandaids to counter the chaotic flunctuations in the voltage caused by the intrusion of expensive and unreliable wind and solar power. The Chief Scientist Dr Alan Finkel issued a very clear statement “…Maybe 20 or 30 years from now we’ll have new kinds of batteries, vastly powerful, more extensive batteries and we can do it with batteries.”  https://www.pv-magazine-australia.com/2020/05/28/chief-scientist-says-big-batteries-are-not-ready-to-fast-track-energy-transition/

Moore’s law does not apply to energy storage. When people first started to talk about using batteries to support intermittent power there was a general expectation that the storage capacity would expand in the way that data storage increased by “Moore’s Law” – doubling every couple of years. This will not happen due to the fundamental difference between storing electronic data and storing energy.

The first Musk battery attached to the Hornsdale No 3-wind farm occupies a hectare, with a capacity of 129MWhrs and a $100Million price tag. The demand for power in SA ranges from 800 MW to 2500MW and the amount of power that the battery can deliver is negligible by comparison. It is not even regarded as storage; it is used to stabilize the supply from one wind farm for a few minutes while gas turbines pick up the load when the wind dies.

Recommendation 1: This this information be filed for reference when RE becomes a live issue again after the pandemic.

Recommendation 2: That everyone monitors the state of the wind supply.

YOU ALSO CAN BE A WINDWATCHER

Anyone can access these sites to become a windwatcher in their own right and monitor the wind supply  daily or even minute by minute. The information on wind resources in this brief should not be controversial because it is readily available on the site of the Australian Energy Marketing Authority (AEMO) and in a processed form on the Aneroid site and the Nem-Watch Widget.

The Nem-Watch Widget conveys the nationwide situation at a glance. CLICK HERE FOR THE WIDGET 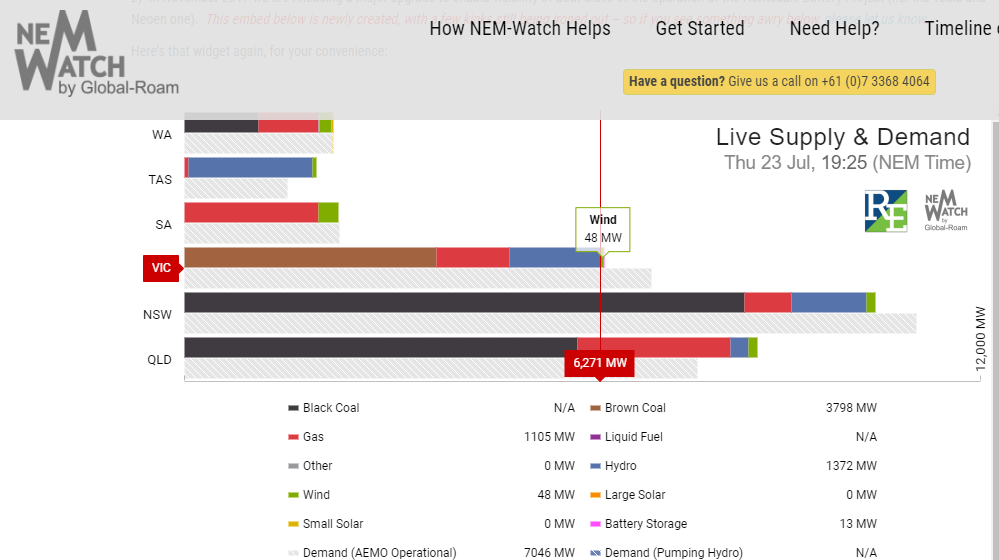 The length of the bars signals the amount of generation in each state and the green segments show how much the wind is contributing at the time. The cursor can be moved along the bars to find the precise value for each contributor (48MW for Wind in Victoria in the example shown). The total for the state can read on a scale below the bars (6,271MW) and the Demand is show at the bottom of the table (7046MW).

The difference between the production (6271MW) and the demand (7046MW) means that Victoria was importing power at the time, most likely from Tasmania. The 48MW of wind production was less than 1% of the demand at the time.

No solar energy appears because the time was 7.25pm, well after sunset at this time of year.

For the situation in SE Australia (the NEM) see the AEMO Data Dashboard and the Aneroid site that draws on it to provide a rolling 24-hour picture. Also be sure to visit the site of Tony from Oz to see how a real wind watcher does it. See the link below!

The Dispatch Summary indicates the amount of demand and generation in each state. It also shows the amount of power flowing across state boundaries. It is updated at five-minute intervals.

The Fuel Mix is particularly interesting. There are several options, ranging from a scan of the year to the current situation. I like the 48-hour display to obtain pictures to display how quickly the wind can change from a high level to a choke point level.

Rooftop solar does not register in the fuel mix because the rooftops are not connected to AEMO data base like the registered generators and that means a lot of the power generated on rooftops during the day is invisible on the display.

Be warned that the AEMO fuel mix shows wind is the blue band at the top and hydro is a green band lower down. The Aneroid display shows the wind in green and the hydro in blue.

The entry page of the Aneroid site is a rolling 24-hour display showing the sources of supply in various categories – coal, gas, water, wind, and sun.  It shows the daily demand cycle with twin peaks at breakfast and dinnertime.

On the entry page are buttons to access more detailed information about each source. Windwatchers of course go straight to https://anero.id/energy/wind-energy

This shows the supply of wind with a rolling 24-hour display. There are buttons to access the % of installed capacity and the volume (MW). There are figures for each state and there are displays for whole months and an archive for past days and months.

Tony from Oz is a veteran wind watcher. He provides very helpful daily and weekly summaries of the power situation.

THE INTRODUCTION TO HIS LONG SERIES OF OBSERVATIONS. (Live link)

Warning. Wind-watching can be time consuming and habit-forming.