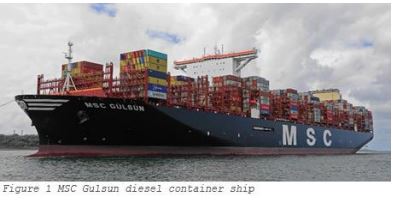 The world depends on modern shipping travelling from country to country to support international trade delivering cargo. The ship in Figure 1 in 2019 was the largest in the world with a cargo capacity of more than 200,000 tons but even so it achieves a speed of a constant 21 kn. It is diesel fuelled which many claim should be curtailed because of CO2 gas emissions, but our modern economies cannot go back to sail.

It used to be that cargo was carried place to place by sailing ships. This all but ceased in the 19th century and it is obvious why. First there is the size, see figure 2 “County of Peebles”. It was launched in 1875 and was one of the very last sailing ships. At the time it competed with steamships which then were quite small. Its cargo capacity was about 1600 tons so to be the equivalent of the modern ship in figure 1 it is necessary to have 125. Certainly, this is not the only problem. Even at sea, wind is unreliable and frequently stops and this for the sailors of the 19th century was a massive problem. It was in this period the phrase Horse Latitudes was coined. The sailors on becalmed ships would throw the horses overboard since they consumed the water that was desperately needed. 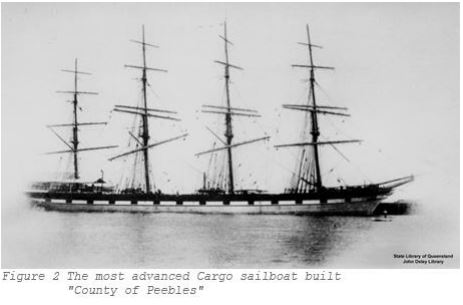 History shows amazingly fast times for sailing ships up to 25 kn but that is variable, and the average is more like 8 kn for the fastest of the Clipper class. Sailing straight into the wind is not possible. You must tack. So, it is well recognised that sail was unreliable and slow. They were totally reliant on the vagaries of the wind, either that was too little or too much and it has not changed!

We are now in the 21st century and after 100 years wind as a source of energy has had a revival. It is quite possible the reasoning goes, to use wind to replace electrical energy generation. The wind varying from becalmed to a gale in very short periods of time is inconsequential apparently. Wind has an extremely low energy density and that too no longer matters. Surely this is a delusion so if you are a leader and have an interest in your legacy be warned that if you support wind as a source of electrical energy you will be damned for it.

The deficiencies of wind mattered very much in the past and it does matter now so you had better understand. “If you don’t know history, then you don’t know anything.

You are a leaf that doesn’t know it is part of a tree.”
― Michael Crichton

Already leading lights of the environmental movement see this and have abandoned it as a folly.

• Jim Hansen the founder of the climate change action initiative.
• James Lovelock author of the book Gaia which argued to save the natural world from humanity.
• Michael Shellenberger founder of “Environmental Progress”.
• Michael Moore a prominent filmmaker and activist who is very much concerned with climate change.
• Patrick Moore Greenpeace founder.
• David Mackay Chief Scientific Advisor of the Department of Energy and Climate Change, United Kingdom

This chart figure 3 shows the output of Loy Yang B and all wind stations on the eastern grid at that time. 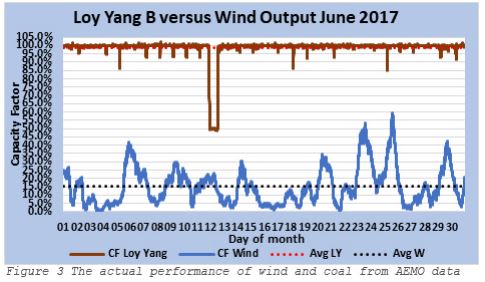 Loy Yang B is a Brown coal station and has a capacity of 1070 MW. The wind stations at the time was a combined capacity of 4335 MW. The coal efficiency was 98% and the wind 15% for the whole month. Or another words 650 MW on average for the whole month. Loy Yang B output an almost unvarying 1070 MW except for a dropout on the 12th day. The wind oscillated between zero and 60%. There were many times it was near or at 0 MW.

To achieve a plate capacity of 4335 MW 1032 turbines each of a capacity of 4.2 MW are needed. To build that costs $8.67 billion. The modern coal-fired power plant of 1 GW capacity are $2.5 billion and will last for 50 years. Wind will only last at a maximum 25 years, so the comparable cost is $17.34 billion. Even at that huge cost wind is still not a replacement because of its variability. This is shown in the chart. 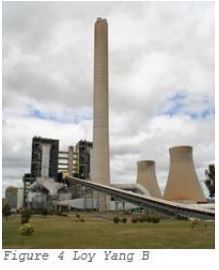 On the left we have Loy Yang B figure 4. True there are the open cut coal mines that need to be included. They are a few square kilometres. On the right is a photograph figure 5 of one of Australia’s latest wind power stations. In the picture you can see about 16 turbines of 4.2 MW each. Ever wondered why it is never the whole lot? The answer is wind power stations cover a very large area of land. In 2017 the area covered by wind electricity generation covered was nearly 2000 km². The average output over a year is 29% of the plate capacity. Every time 1 GW of fossil energy is closed another 1677 km² of suitable land is needed. At the end of 2019 fossil energy power stations had a plate capacity of 34.9 GW. To replace that with wind 120 GW covering an area of 54700 km² of suitable land is required. Or another way to think about it, an area five times the size of Sydney Australia. The installation cost for that will be $265 billion. These last 25 years so $530 billion across 50 years. A coal power station lasts that long.

Unfortunately, that will not be enough. Go back and have a look at the chart. Notice the line for wind. It is by no means steady. It varies from 0 to 60% and to have a whole grid which varies like that is untenable. What is shown is all the wind stations over an exceptionally large geographical area. 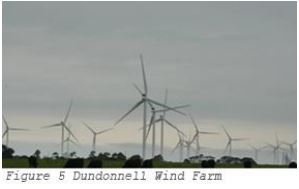 Modern civilisation must have electricity that is available on demand. That was the whole point of Snowy Mountains 2.0. Modelling it is a complicated process, but it has been done for the 7 GW of 2019 by hypothetically assuming it exists and computing whether it would support wind for that year and produce a dispatchable energy source. If it does produce reliably 336 GW hours as designed, then yes it will support 7 GW of wind. That is using 7 GW of wind with it is equivalent to a 2 GW fossil station. The last estimate of cost I have seen was $5 billion. If this were applied to all extra wind needed that is 120 GW, then 17 replicas at least of that pumped storage facility would be needed. If you could do that that would be $85 billion. Snowy Mountains 2.0 is pumped storage so the upper reservoir must be a considerable height above the lower one. Suitable terrain would have to be found or constructed. That means a lot more than $85 billion.

So, this is what my warning is about. If any leaders of our nation managed to achieve such a thing or even only a substantial part, their immediate reputation and legacy will be damned for it as time passes. Wind energy was abandoned in the 19th century for exactly the same reasons as it should be now. It is unreliable and because it has low energy density it is just not fit for purpose.

This folly comes from the belief in climate change. The case is renewable energy is not fit to change anything about the climate. In fact, it is quite detrimental environmentally in many cases.